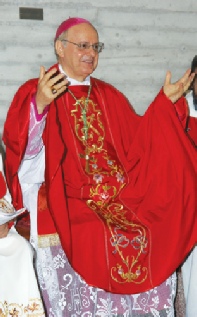 INTERVIEW with The SECRETARY GENERAL of the SYNOD of BISHOPS


He was born September 29, 1940, near Pisa, Italy. Ordained in 1963, he studied at the Pontifical Lateran University, the University of Perugia from 1970 to 1973 before his assignment to Guatemala as part of the Diplomatic Service of the Holy See. He worked in many other areas of the world before, in 1992, he was relocated to Haiti when Pope John Paul II appointed him Apostolic Nuncio. At the same time he was appointed Titular Archbishop of Diocletiana. Subsequent assignments include Paraguay (1995-1999), India (2000-2002) and Brazil (2002-2012).

The Congregation for Bishops, which he serves as secretary, oversees the selection of new bishops that are not in mission territories or those areas that come under the jurisdiction of the Congregation for the Oriental Churches who deal with the Eastern Catholics, pending papal approval. It also schedules the papal audiences required one every five years for bishops and arranges the creation of new dioceses. Traditionally, the secretary of the Congregation for Bishops is also secretary of the College of Cardinals. On March 7, 2012, he was appointed to this role in which he served until January 28, 2014.

He served as secretary of the 2013 conclave as a result of his role of secretary of the College of Cardinals. It was reported by Rádio Vaticano, Portuguese section, that Archbishop Baldisseri received the cardinalitial zucchetto from Pope Francis at the end of that conclave. This was an old tradition that had last been practiced by Pope John XXIII in 1958, when he placed his skullcap on the head of Monsignor Alberto di Jorio, who was secretary of the conclave, creating him a cardinal formally in December of that year.

Archbishop Baldisseri is the current Secretary General of the Synod of Bishops since his appointment was announced by Pope Francis on September 21, 2013. On December 16, 2013, he was appointed as a member of the Congregation for Bishops. Baldisseri was created cardinal by Pope Francis on February 22, 2014, with the title of Cardinal-Deacon of Sant’Anselmo all’Aventino. In September 2014 he was appointed a member of the Congregation for the Evangelization of Peoples. 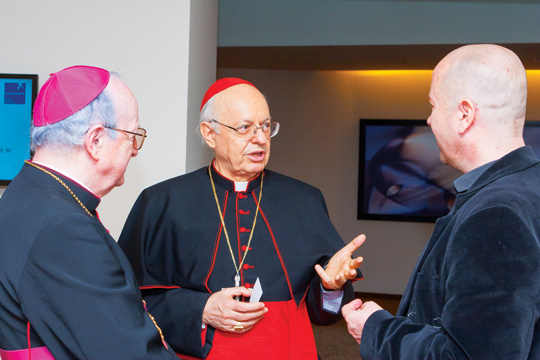 Cardinal Lorenzo Baldisseri, secretary general of the Extraordinary Synod of Bishops on Marriage and the Family, caused controversy recently when he said in an interview that he wanted to bring Pope St. John Paul II’s teaching on marriage, contained in his apostolic exhortation Familiaris Consortio (The Role of the Christian Family in the Modern World) up to date.

Some misinterpreted his comments to mean he was suggesting a change to Church teaching. Noting that the document is more than 30 years old, he said: “The Church is not timeless; it lives amid the vicissitudes of history, and the Gospel must be known and experienced by people today.”

The Italian cardinal explains what he meant by his comments, addresses concerns that the synod may appear to intend to change the Church’s teaching on Communion for civily divorced-and-remarried Catholics and is asked why John Paul II’s teachings on marriage and family have been noticeably absent in some key debates by synod leaders.

You said that the Church’s teaching on marriage and the family needs to be “updated.” What did you mean by this?

In the sense that St. John XXIII intended [the word “updated”] for the Second Vatican Council. This means that the theme of the family, after over 30 years, since the document Familiaris Consortio, must be looked at in a global sense, considering the often uncommon anthropological and social situations today.

The Church is not an abstraction; it is a human and divine reality that moves through history. The Church’s mission is to proclaim Jesus Christ, who is a Person, the Son of God made man. The message is addressed to real people and is transmitted through the word and testimony of people who have believed in him and who, in virtue of different roles and charisms, become missionaries in the world.

Some are concerned that the synod will make it seem as if the Church’s teaching has changed, when that is not the case. Is this concern justified, in your opinion?

The Church’s teaching is contained in the Catechism of the Catholic Church, which everyone can read. The Church’s magisterium exists, which ensures the integrity and authenticity of the faith. There is also theological research and that of other ecclesiastical disciplines that help to deepen the knowledge of the truths of faith, confessed by the faithful and guaranteed by the assistance of the Holy Spirit.

The magisterium has the task of certifying fidelity to the “deposit of faith,” entrusted to the pope and to the bishops. So the next synod moves along this line of doctrinal certainty towards pastoral care suited to the times.

What will be your exact role in the synod, and how much influence will you have on its apostolic exhortation?

The document that will be released by the synod will be the result of the study and reflection of the synod fathers on the themes established by the instrumentum laboris [working document]. The secretary general has the task of monitoring the progress of the event. In the presence of the Holy Father will be the president delegates who, in turn, will direct the sessions and congregations and a relator general with a special secretary, who is in charge of collating the issues and helping with the drafting of the document, which must have the consensus of the members of the assembly and which will then be consigned to the hands of the Holy Father, who will use it as he deems appropriate.

Bishop Nunzio Galantino, the general secretary of the Italian bishops’ conference, recently said the synod should discuss issues related to abortion, homosexuality, etc., without any taboo. Do you agree with this?

In this regard, I would like to say that the topics that will be discussed in the assembly of the synod are those indicated in the questionnaire. The theme of life and, therefore, also of abortion, euthanasia and others, as well as issues that affect the family in its social, economic and political aspects, shall be handled in the second stage. And this will be done with all freedom and clarity.

Some people have noted a reluctance among some of those closely connected with the synod to apply the teachings of St. John Paul II on the family. Why is this, in your opinion?

The teaching of the Church has the secular dynamic of a journey, as on the road to Emmaus. Jesus stands at the side of the disciples, accompanies them and nourishes them with sacred Scripture and the Eucharistic bread as they go along.

Each person, in various stages of life, roles and charisms, brings his contribution, and if we accept this perspective, which is often emphasized by Pope Francis, there is room for everyone to join in and work in the pursuit of truth and the practice of love.