INTERVIEW with the UNIVERSAL ARTIST from VIENNA 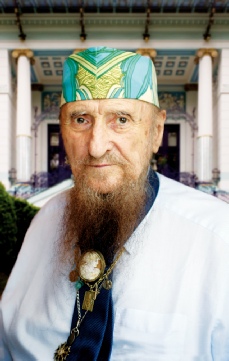 He was born in 1930 in Vienna. As a universal artist, he became world famous as graphic artist, painter, sculptor, composer and poet. Ernst designed furniture, tiles, porcelain, jewellery, medallions, tapestry, carpets, fabrics, costumes and stage decorations. He created various substantial building projects like a hotel in St. Veit an der Glan or a church at „Thal bei Graz“, Austria and a number of glass mosaic fountains were built after his designs.

His father was of Jewish ancestry. Ernst at the age of 12 avowed himself to Roman Catholicism by being baptized at the St. Stephen’s Cathedral in Vienna. Little Ernst’s artistic talent was undeniable, so his teacher decided to include extracurricular subjects like painting and sculpture in his education. Studying at the Vienna Academy of Fine Arts, Ernst’s idols were no less than Egon Schiele, Gustav Klimt, Pablo Picasso and Max Ernst.

After the WWII he followed his friend Friedensreich Hundertwasser to the „Mekka of Art“ in 1949 – Paris. There, Fuchs made use of his knowledge of the old masterly techniques. Because he could not afford an apartment or studio, Fuchs would „live“ in the Parisian cafes and paint his miniatures like the old masters. Here he first caught the attention of Jean Paul Sartre, Jean Cocteau and especially Salvadore Dali. In 1953, Fuchs left to New York and Los Angeles. He stayed there only 3 years and during that time he became the „guru“ of the young art scene on the Westcoast and inspired such movements as airbrush and fantasy painting.

His undisputed best-known work is his own museum; a Villa in Vienna built by Austrian architect Otto Wagner, which he transformed into a fantastic Fuchs museum.

Extremes are what determine his life and work. God, Eros, knight, death and the Devil! And, even as an 85 years old man he does not come to rest. He always felt unloved and not understood by a lot of people, but he has got a big family consisting of sixteen children who he has with seven wives and a worldwide fan community. Three generations of artists all around the world are already his students and artistic successors.

You were born between two World Wars and your parents were of two different religions. Did it have any influence on your childhood and adolescent life?

My parents wanted me to decide on my own what religion I am going to be. I knew that I could not live without it and that I have to decide for one religion.

Did this period of life have any implications on your work?

Of course, I was twelve years old when I was baptized and since then Jesus Christ appears in my production.

In 1949 you went to Paris with your friend Friedrich Hundertwasser and you have lived there for 12 years. Can you describe this period of time a little bit closer?

These where the hard times, the times when I lived in a huge poverty. Often I did not have any place to live and did not have anything to eat. But, it was rare and exceptional period of time because in Paris I got to know many significant people and artists of the time such as Salvador Dali and Jean Paul Sartre.

You lived in monastery for some time and fathered before and after this time. You have sixteen children. Have you always dreamed of a big family or that was not your first intension?

Do you have good relationships with your children?

Of course I do!

We know that you were into arts from your childhood, but what has inspired you to become versatile artist?

It has always been my constant effort to achieve Gesamtkunstwerk (universal artwork) as French people say Art total.

How did you come up with the idea to establish the Vienna School of Fantastic Realism with Arik Brauer, Rudolf Hausner, Wolfgang Hutter and Anton Lehmden?

The School of Fantastic Realism was created on the basis of old art schools and groups like “Der blaue Reiter” in Germany or school of Secession.

Was there a time when you did not have any inspiration and despite you could not create new pieces? If you appeared to be in such situation, how were you able to overcome it?

If I did not know how to continue with my art creation I paid attention to other artistic activities as music or I had been writing poems, essays, philosophical ideas, etc. They gave me the strength and inspiration for further production.

You said that you are familiar with all the religions worldwide. As a young boy, you read books from Karl May and now you realized that he was a visionary and in the way describing our world today. Why do you think there is a lack of religion nowadays?

I have that feeling that we live in materialistic world where religion and faith in God stops to have the value and people like to incline only to practical thinking.

Moreover, some of your pieces are focused on religion. When you paint, do you usually focus your pieces on religion generally or rather on specific religion (Christianity)?

Religion plays a huge role in my pieces. Art without a religion is for me inconceivable because it bears the heavenly spark. My pieces include religious tolerance and harmony.

You together with Friedrich Hundertwasser and Arnulf Reiner founded Pintorarium. It is hard to find more information about it; can you tell us more about it?

We established Pintorarium in 1959. The aim of this movement was to create art workshops like the ones from the time of old masters. Of course, it had also a provocative purpose.

There are many techniques painters or artists generally use. Which one do you prefer to use the most and why?

Since I was a little boy I was enthralled by the combined techniques of the old masters which I learned from the book of Max Dönner. During the WWII my idols were Leonardo a Rubens. And, finally vibrant colors can only be achieved by scumble.

Your artistic work mainly includes history, mythological or biblical figures, have you anytime thought of producing pieces focused on modernism?

In my pieces I always dealt with the current issues and problems of our time, for example, already in thematic area Bikini Atol, or in the cycle of apocalypse where one piece is like an airplane which crashes into a skyscraper, painted long before the event September 11th 2001.

During your life, you have traveled around the world a lot. In which country were you most productive in terms of inspiration and creativity?

Of course, in Paris.

Which work piece is closest to your heart, and why?

Absolutely, Apocalyptic chapel in Klagenfurt. It is my masterpiece on which I have worked almost for twenty years. It is the topic of my life.

You had an exhibition together with world-known Japanese artist Yoko Ono. How do you see her artistic work?

I appreciate her as a director, her short movies but the most has fascinated and captivated me her music.

You have been to America couple of times, what is your relationship to this land?

I like America. I worked there already in the 50‘s of the last century.